Some of the most cherished notes in the world are titled “Grandma’s Recipe.” Every holiday season, we go digging in our kitchen drawers to have grandmas recipe on our tables. The paper is old and dirty; your grandma’s lettering style is almost cursive, almost script, and rushed. Her choice of words, “ a pinch of this, two cups of that.” With a note, she immortalizes the taste of the holidays and herself. Without the gift of language, our micro-histories disappear forever.  It doesn’t matter so much the structure of how we preserve ourselves with words, Just that it happens. It worries me that so many people are turned away from being apart of conversations that tell their history.

Supposing you’ve ever indulged in the guilty pleasure of rereading an argument in the comments of any social networking site. You’ve seen one party try to dismiss another person’s argument simply because they used incorrect grammar. So if they spell a word wrong, then whatever claims they made during the online debate cease to exist when the opponent calls out improper spelling as a trump card. Because obviously, someone who can speak and write a language perfectly holds the intellectual high ground and is the winner of the debate by default. There is hardly any room for nuance in today’s world. In the midst of all the bickering, the first weapon that people grab for is the same as it has always been—the spoken word.

This is a major barrier to all the social progress we cry for on Twitter. The dismissal of an argument solely on the structure of a sentence proves one thing. It’s not about educating each other or finding common ground. It’s about being right. It’s petty and only about two people instead of the groups they speak on behalf of.

Language is absolute gibberish. Not only is it gibberish, but all its rules are arbitrary. They rarely follow any real patterns except preference. But humans use it to mark down one group because they speak this way or that way. There are so many other things you can do with language and not be so… horrible.  Language is beautiful, entertaining, funny, complex. We use it in vain when we uphold the structure of a sentence over what was actually said. Let’s embrace all the nonos for a little while, shall we?

Swearing is a natural pain reliever. It usually means you have a higher IQ, and it’s really effective. Social norms say that you cant swear here or there, your grandmother will wash your mouth out with soap, and the spiritual folks have labeled it as “low vibrational.” Swearing does so many good things. Language is so much more fun when you cuss. Could you imagine stubbing your toe and not crying out a big healthy

Exactly so what is the big fucking deal? To be fair, I do not swear in the presence of my grandmother because… I don’t know if she’ll let me live long enough to complete the sentence. But on my own, yes, I am cursing up a storm. I love cussing; it’s one of the best elements in language to convey seriousness, rage, and disgust, which are all major defense mechanisms to keeping us alive.

The word tomorrow is apart of the English language because Shakespeare made it up. Virginia Woolf faces us with some of the juiciest of the first-person narrative. Using her stream of consciousness style to create emotional insights into the characters and tension in the plot. Which would become the envy of many great writers and nobodies like myself. Toni Morrison writing stories exclusively for black people because why are so many books about white men? Well, English is a white man’s language, after all, so you can’t charge them there. But alas, let us write books in color.

In school, they teach us about the readings from these experimental writers. Then, force us to write like academic jargon dispensers. English teachers then gridlock students into the essay. You cannot swear, Your thesis goes here, paragraph two, three, and four must fulfill this goal, and so on. Snooozeville!

But there’s a word for that, and it’s called prescriptivism.

Language is one of the most dynamic forces on the planet, breathing like fire and moving between every single one of us like water. But, in school, when we cross paths with a language class, its structure, and firm lines. All these rules and no emotion what so ever. It’s excruciating for everyone involved.  While every single reading in the class challenges the status quo, the school system firmly enforces the status quo as they teach us to write. Tell your story. In your own unique way, however, it suits you. Writing is one of the few ways we can truly immortalize our voice. Paint an honest image of it as you write.

It has been said that speaking is thinking. Where you were raised, and how much affluence is associated with that location can be heard in how you talk. A voice marks three things in our ears; Location, Emotion, and Health. We can hear that this person is from the east coast, they might be a little sick, and they are very angry.

It goes further when we hear someone speak we decide how intelligent they are. Having a thicker accent can denote coming from a working-class family, whereas a new yorker who has a “uge” instead of “huge” accent but not “caufee” over “coffee” accent is a sign of wealth. In America how much money your family makes directly affects the quality of education a child can expect to receive in their upbringing. When an individual relies on slang to make their point in a regular conversation the listener is more than likely in the habit of deciding that the person who uses slang is less intelligent. Because heavy use of slang is tied to a lower-income area, with less access to education. But intelligence is not a static quality it can change over time.

AS IN YOU CAN GET SMARTER THROUGH EXPERIENCE AND EDUCATION. 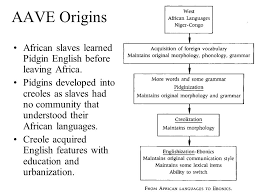 African American English Vernacular aka Ebonics. A lot of people mistakenly label an entire dialect as, “talking ghetto”. Dialects are inevitable variables in language and happen whenever a population is separated for long periods but still concentrated with an original cultural source, for black people this is their African heritage. NO matter what language is fluid and evolves into ribbons of necessary verbiage to express those experiences.  It’s an unstoppable force but in America the kind of language you use marks important class distinctions which are major indicators of how you are likely to be treated as you navigate the world away from the “ghetto”. Not only that any group that not under the umbrella of “white” is demonized for multilingualism. Piled on top of classism is another layer of racism. There is nothing wrong with speaking ebonics, there is nothing less intelligent about speaking ebonics because ebonics cannot be faked. Like this:

Spanglish experiences a similar, distaste from the rest of the Spanish world. Because it’s improper. But language is a powerful tool to track the migrations of people so sometimes,words are lost and others are born because the words are a reflection of the people and the changes they experience in a new place. Historians for a long time could not figure out where the Slavik people were from originally in Europe but they were all over the place. In France, North Africa, and more, so how did they find them? The Slavs borrowed words for trees from all these other cultures because where they were from originally had no trees. Which is the Pripet Marshes, a swamp in the center of the European peninsula.

Language is a guardian to the history of people otherwise unrepresented.

This is the famous phrase that caught the Unabomber in 1996 after a 17-year long Manhunt, which to this day is the longest in FBI history. They caught him with a sentence in the image above, something totally unique to him. That is called an idiolect, which is what you call the speech habits particular to a single person. Remember grandmas recipes the scrap piece of paper that keeps her here long after her time. How you speak is that special. Society and educational institutions do their best to scrub it away because it’s easier for them that way. When you have the urge to correct others remember to be gentle because otherwise, we risk losing a precious piece in the puzzle that speaks for everyone. Everyone has the right to be leave their mark, like writing on the walls.

Processing…
Success! You're on the list.
Whoops! There was an error and we couldn't process your subscription. Please reload the page and try again.