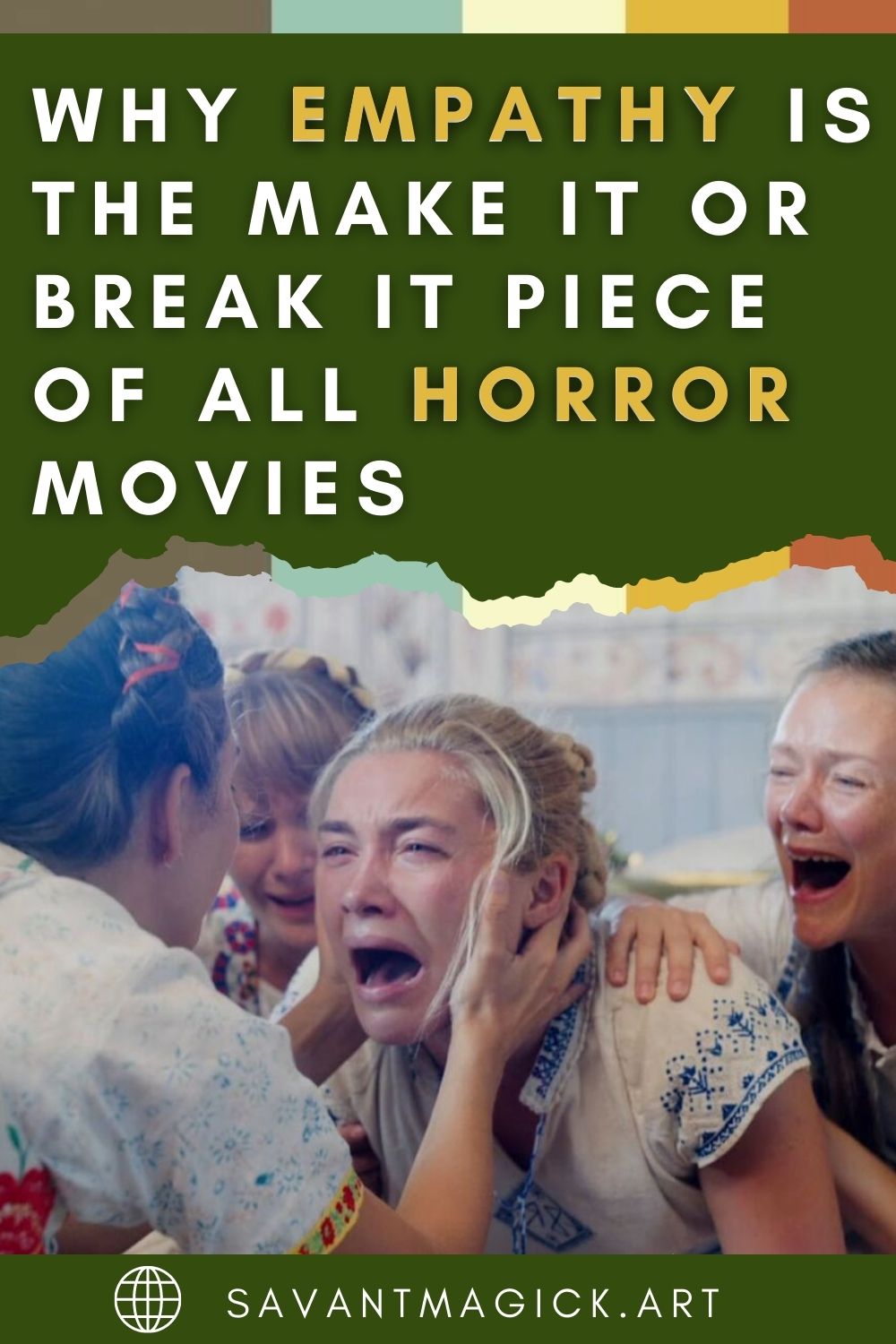 The primary ingredients in a hamburger are beef, lettuce, onion, pickles, and tomato. Then there is cheese, not primary but optional. But cheese feels a lot more a part of the burger than it did at the beginning of the 20th century. Horror Movies and Hamburgers came into the world at around the same time. Yes, so while Edison was launching the lightbulb someone invented the hamburger, and the short film “The House of the Devil” became the first horror movie ever in 1896. But the cheese of horror films that make for an exceptionally decadent film is Empathy.

There are spoilers up ahead 🙂

Today’s world continues to remind us how connected we all are, how much access we have to information, and how regular people are capable of more visibility than history has ever seen. No doubt the rise of the internet and social media have muted empathy. Social media is one of the most divisive instruments on the planet. Propelling the polarized us v. them narrative into our identities, communities, and national politics. With the high potential for attention that an individual may be able to receive from their social media following. Most people try to put their best foot forward. Showcasing usually very picturesque and fictitious versions of their lives. This can make it seem like everyone is doing better than you when you are unhappy and dealing with hard times. Restoring empathy is key to the survival of Humanity. Being any sort of victim on social media is usually dismissed by peers. Further isolating people to suffer longer, more quietly, and all the while feigning an image of happiness. Social media has given birth to the oxymoron “toxic positivity”.

The Interesting Role Horror Movies are Playing in All This:

The horror movie genre adapting to a special role of putting empathy at the forefront of media because in times like these it needs the extra attention. You have to suffer yourself before you can realize that other people suffer. Horror movies are shedding the light on the real tragedies marginalized groups face by using horror movies to disguise their depth. This is the primary step to emotional maturity, and empathizing with marginalized groups, not sympathizing. If you’re a film buff or just a prenty snob like myself. You’ve heard the term ‘Social Thriller’ floating around the name of Jordan Peele since his 2017 release of “Get out” with Racial Tensions at a new high and the remaining shock of the 2016 election the film was adored by critics and audiences alike.

Empathy for Black People In America:

In 2017 racial tensions were going back to old extremes as they were in the 1960s. The Black Lives Matter movement was leading the conversation about gun violence in America. In 2020, these protests exploded across the nation following the murder of Breonna Taylor and George Floyd at the hands of law enforcement. Black people in America are being invalidated by the media with myths of “Black on Black Crime”, Donald Trump saying that kneeling during the National Anthem makes you an SOB, and the list goes on. This film could not have been timed better. Made people understand how alienated a black body can feel in white environments. Even when everything seems completely fine. You are still just a visitor.

Jordan Peele’s 2017 get out is about a young couple going on a trip to meet the woman’s family. The woman is white and the man is black(Chris). At the beginning of the movie, the white characters try to reassure Chris of his safety with comments like “If I could vote for Obama a third term I would”. Quickly, the movie reveals that Chris is being groomed to have his physical body sold to a blind white man who is paralyzed from the waist down. His girlfriend’s family has mastered planting the consciousness of one human into another. His girlfriend was in on it the whole time. He must escape his kidnappers. The film addressed the fear that Black people experience in any homogenous setting with their white counterparts. Themes like the “sunken place” In the film examine how racial identity is so integral to the human experience. How letting white people get inside of your head can be the very death of your identity as a whole and as a black person.

Following the #METOO movement where women came out to tell their stories of sexual assault, there was an outpouring of no longer silent victims. Harvey Weinstein was tried for his sexual abuse against dozens of young girls, Bill Cosby, Jeffrey Epstein, and so many more have been dragged into the spotlight and then through the mud for their unacceptable behavior.

In the Film “The Invisible Man” Woman Cecilia leaves her abusive boyfriend Adrian. Adrian is an optics genius and leader in the field. After she leaves, Adrian seemingly attempts suicide, and Cecilia begins being attacked physically by an Invisible Force. She’s the only one who knows this force is there. She tries to expose it over and over. But it hurts her friend and kills her other friend at her expense. She eventually is placed in a mental hospital while awaiting trial for a murder she’s been framed for. But by the end, she gets out of the hospital, discovers she is pregnant, kills the invisible man, and her abusive ex-boyfriend. This movie is a perfect allegory for how women so often have to Prove that their abuser exists. They have to prove that they aren’t crazy, making things up and outsmart their own perpetrator along with the biases of society to get justice. In an ongoing argument. Rapper Meg The Stallion was a victim of a shooting incident with Rapper Tory Lanez, she had to prove that she was shot by him. The situation spread like wildfire on the internet… Although in helicopter footage you can see The superstar Meg leave bloody footprints while complying with Law enforcement, There are hospital records stating that she had a gunshot wound in her foot, and a witness. Meg The Stallion is still defending herself.  In The Invisible Man Cecilia kills her ex-boyfriend for revenge. This is important because society needs to see men and particularly men in power like Celia’s wealthy boyfriend, have consequences for their abuse towards women.

In 2019 South Korean film director Bong Joon Ho shook the world with his theatrical release of the movie Parasite. The film took home two Oscars and dazzled western audiences. The plot takes place in Seoul Korea where a poor Kim Family lives in a tiny sub-underground apartment. The family struggles to make ends meet and work folding pizza boxes. The son gets a job tutoring the wealthy park family’s daughter.  One by one each member of the Kim family works as a servant for a member of the Park family without revealing that they are all related. To do this, they lie, get the existing maid fired, and even get into physical fights to keep their status under the family. In the movie we see the Park family live in an elevated part of the city to signal their status in regards to money. Same for the Kim families with their half below the ground apartment.  Making their circumstances appear better than reality because they are not completely underground. When the Park family goes away for the weekend for camping the Kim family goes on vacation in the Park household. They revel in their ability to fool the Parks. Until the Parks return home early because of the Bad weather. The Park family is completely unscathed by the rain. However, for the Kim family, their apartment is completely flooded leaving the family displaced, most of their belongings are unsalvageable, and the family sleeps in a shelter for the night. Both families are detached from reality. The wealthy park family is completely unaware of the ways they have been and are presently being exploited by people every day. They are too insulated by their wealth to notice. While, the poor Kim family lives in the fantasy that they can escape their station in life, and rise to wealth.

This movie is a response to the division of social classes by wealth. Both groups live in their own perception of reality. Often neither one being more accurate or closer to the truth. Developed nations have been seeing a fast-disappearing middle class. There have been several shows on TV and film responding to this issue.

The movie Parasite did so well in the western market because it’s a very relevant story reflecting people’s attitudes towards money and status. Much like the desperation of Walter White in Breaking Bad which, aired while America was going through the 2008 recession. Moreover, Parasite shows us that these families are more alike than their indications of social status can ever suggest.

There are monsters in this world. We can be told its in the past, it’s completely imagined, or we turn a blind eye to how we contribute to our own misfortune and our responsibility to help others. Invalidating and denying the experiences force the victims to heal too quickly, or never heal at all. The most fundamental theme in horror is empathy. You must know what they feel to be afraid. Opening our eyes to see that other people suffer the way that we do. Enjoy this Halloween. Remember somebody else has faced the same monsters as you.